Welcome to the first blog post for our new house! As many of you know, Jesse and I bought our first home together earlier this year. The house is south of Seattle in a city called Des Moines. Yes, there is a Des Moines in WA state! It is the 6th house/property we made an offer on in the span of about 1.5 years. When we started looking for our own house, we were open to anything–land, a tear-down, a newly remodeled home, or a fixer upper. We kept our search primarily in the cities south of Seattle (no way could we afford what we wanted in Seattle). Of all 6 properties we made an offer on, we definitely are the happiest with the house we ended up getting!

When we first saw the house before purchasing, we knew that it would need a good amount of renovations done. The house was built in 1962, and is a tri-level home at about 2,400 sq ft. The bathrooms were very old, and almost the entire house was carpeted. We thought at first that those were the main things we needed to change, and it wouldn’t be too bad…. but we were wrong…. we ended up changing so many more things than we anticipated. And now, 6 months (how??) later, we are almost to the finish line!

Even though we are both DIYers, we hired most of the work out for a few different reasons:

Sooooo since there will be many before & after blog posts to come, I figured I would create one post with all the before photos! Here we go! 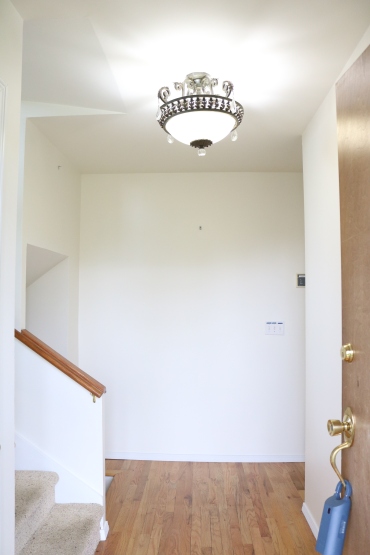 Entry way when you first walk in

View of front door from inside

On the main floor, to the right it leads you to a hallway where the three bedrooms and main bathroom are. To the left, you can either go upstairs to the kitchen/living/sunroom, or downstairs to the basement.

For the main bathroom, we were doing a full remodel. Nothing was to stay, except the tub… which we ended up switching out to a new one later. But that headache of a story will be told later when I blog about this bathroom!

The master bedroom has an ensuite half bath, and a custom closet unit! The floors, sconces, paint color and closet doors were to be updated in here. And, we are adding a fan/ceiling light.

The half bath was also to be gutted completely and made new! The only thing staying is the window (which may later get replaced). We debated on putting a small shower in the half bath, but because of our budget, we couldn’t make it happen this time! Maybe way later down the road if we are still living here, we might do that. Update: check out the renovation here!

Here are the other two bedrooms. One bedroom has a door that leads outside to the deck. And a doggy door! Zion actually can fit through it, so we are deciding to leave the dog door for now.

Now let’s take a walk upstairs to the main living area. First we have the living room space. In here, the flooring, railing, and wall color is to be changed. And the mirrors were definitely going down. There are no main lights in the entire living space, so we wanted to add recessed lighting to the entire room (kitchen included). You can catch a sneak peek of the new wallpaper we put up on this mirror wall on my IG!

The only change to the dining space would be a new chandelier, and instead of having a ceiling fan over the dining area, we are going to put one in the center of the living room area.

Next up is the kitchen. We for sure knew we wanted to change out the appliances and remove the island, but after lots of convincing (you can take a guess on who tried to convince who), we also decided to switch out the cabinets and countertop. Upon knocking down the island (that is shaped in an L), we found out that the island used to be walls! We assume the previous owner probably wanted to open up the kitchen area and just sliced the walls in half and slapped a granite piece on top. It actually is a pretty affordable way to open up the space. Oh, and the moulding on top of the cabinets was going to come down too.

One of the main reasons we were okay with renovating the entire kitchen, was that we were going to install a kitchenette in the basement using the cabinet boxes and most of the appliances from up here! But as of a couple weeks ago, the boxes weren’t going to fit nicely with the layout we ended up having, so it will be all new kitchens in this house! Update: Here is the kitchen renovation!

Now to one of my favorite rooms, the sunroom! You may have seen a sneak peek of this on my IG. But really this room is probably undergoing the least amount of change. Because the sunroom was added onto the house (used to be an outdoor deck), it was one of those “kits” you can buy, so the walls are not normal drywall, and are not going to be easy to paint. Only one wall is made of actual drywall, so that wall will be painted, and then the other changes will be new floors and a new ceiling fan.

And now onto the downstairs basement. Which really isn’t a basement, since we are on a tiny slope, and the basement actually leads to the ground floor outside as well.

First up we have the stairway to the downstairs. The doorway on the left wall is what leads to an office space/den, that we are converting into a bathroom. We are moving the doorway to the adjacent wall, and then going to add an actual door here instead of the accordion door.

The walls were made of wooden boards, and the ceiling is made up of ceiling tile. We are switching it all out to drywall. The fireplace is also brick, and is connected to the fireplace upstairs. Both are functional! But we will not be using the downstairs one, and I am likely going to paint this one black too!

The laundry room is in the basement, and is also where the furnace and water heater is stored. It’s a fairly large room. For now we are just updating the floors, light fixture and walls, but eventually down the road I want to do more of a makeover on it!

Next to this main living area is a huge rec room that we are turning into a bedroom. There will be new carpet put in, and the alien lights and closet mirrors are coming down. There is a separate entrance down here, as well as glass sliding doors. We are going to leave both for now, but eventually, we may move the door to the main living space, and turn the sliding doors into one big window. Not sure yet, but we will cross that bridge when we get there!

That’s a wrap for the tour of the inside of our home! I may do a tour of the exterior at another time. Jesse is already planning on redoing our landscaping next year and maybe even installing a sprinkler system! As for the exterior of the home, it just got a fresh coat of paint when it got listed, so we will likely not update the outside for a while (even though I’d love to paint it a dark gray or black or white…not really sure). The backyard is fully fenced which is awesome, because we can leave Zion in the back without worry. Although, we did have to get gate clips because he figured out how to open the gate!!

I’ll be updating this post with links to the completed rooms once I start blogging about them! And if you want to keep following along the journey, remember to follow me on IG!